"In 1919, Frederick William Vanderbilt, scion of one of the wealthiest families in America and arguably one of the most influential men in the country, acquired oceanfront land in the exclusive Condado District of San Juan, Puerto Rico. He selected Warren and Whitmore - one of the foremost architectural firms of the time, boasting the designs of New York’s Biltmore, Commodore and Ambassador Hotels and Grand Central Station to its name - to design the Condado Vanderbilt Hotel, an exclusive tropical retreat in the heart of the Caribbean. The early Spanish Revival style architecture was suggested by Frederick William Vanderbilt himself. Taking great advantage of the property’s breathtaking setting overlooking the Atlantic Ocean, the designers created an imposing structure with white walls, red tiles, French windows, lofty ceilings, and other design details typical of the style at the time. Inside, the original sweeping staircases and graceful archways remain in tact to this very day". 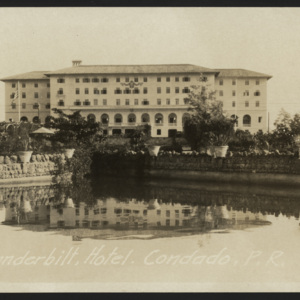